On Thursday the 19th of April 2018, the Watford coach came in to teach the Year 6 girls more skills in football to prepare them for the Premier League Primary Stars competition in Leicester. The football lesson really expanded the girl’s knowledge of football. The girls now know how to keep control of the ball, use skills to score and to dribble in many different ways. The football coach will keep introducing new skills so they can finish first at Leicester!

On the 22nd of November 2017, at 2pm, St. Teresa’s boys football team went to play a football match against Cedars Manor school.  After the game began incredibly Ryan scored the first four goals and they were all cracking finishes. Then  Louis followed with two more, one from Keelan and a fantastic volley from Tom.  Following all the great goals came half-time.  Everyone gathered round Aidan for a team talk. The second half started and Cedars scored first with a well taken goal, St.Teresa’s started playing brilliantly scoring goals at will after this.  It was 16-1 with a minute to go when Louis went sprinting down the wing and with the last kick off the game scored his third and final goal to complete his hat-trick after coming out of goal after 15 minutes of the second half.  As the team got back to school everyone celebrated. They had beaten Cedars Manor 17-1.

On Thursday the 9th November,  St. Teresa’s brought two teams out of school to play in a tag rugby tournament. This report is going to be about the blue team. The tournament took place in the Hive (Barnet FC training ground).  The pupils left the school at 12:00pm and they came back at 3:30pm.

The captain (Keelan) led the stretches and the passing drill.  Shortly after that the first game kicked off which we won 4-0 against Stag lane.  After that we had a game against St. Georges' B and the result of that game was 2-1 to us.  Then our final game in the group was against St. Anselms thankfully we won 3-1.

Later on in the day we found out that we got through to the Quarter Finals because of our performance in the groups.  Unfortunately we had to play the other St. Teresa's team in the Quarter Final so no matter what happened one of us had to lose. That game was VERY tough - the final score was 3-2 to the blue team. Then straight after that game we played in the semi-finals against St. Georges A we just edged it out of that one of a result of 2-1.

Now it all came down to the school that beat us last year in the final …West Lodge.  They were very hard school but so were we.  The first try was scored by Chase (Y5B).  Then responding very quickly the West Lodge captain ran through us and scored an equalizing try.  Then with only 5 minutes left Michael (Y6B) scored the winning try! We were all gobsmacked that in March we were going to Crystal Palace to play tag rugby representing Harrow.

Harrow Primary Schools District team played the second competitive match of the season against their Barnet counterparts. The match started evenly but Harrow managed to take the lead with Joe (Grimsdyke) scoring after good work from Thomas (St. Joseph's). The remainder of the first half was closely contested and Barnet equalised with a well taken free kick at the end of the half. The second half started and Barnet used the confidence gained from their goal and scored a further two goals to take a 3-1 lead. Harrow didn't let this get their heads down, they scored another goal to bring it to 2-3 with Thomas scoring after a solo run. The pressure continued which lead to Pierce (St. John Fisher) drawing it level from a pass by Thomas, we pushed on from this and Michael scored from a corner to make it 4-3 to Harrow. Pierce finished off the scoring with another fine run from Thomas. At the end of the game the players voted their man of the match, it was awarded to Pierce which was a nice birthday present for him.

I would also like to add a huge thank you to the players and parents for raising funds for the District team to buy their first new kit in 8 years with our badge in it. An honour for all to wear and represent their school and District 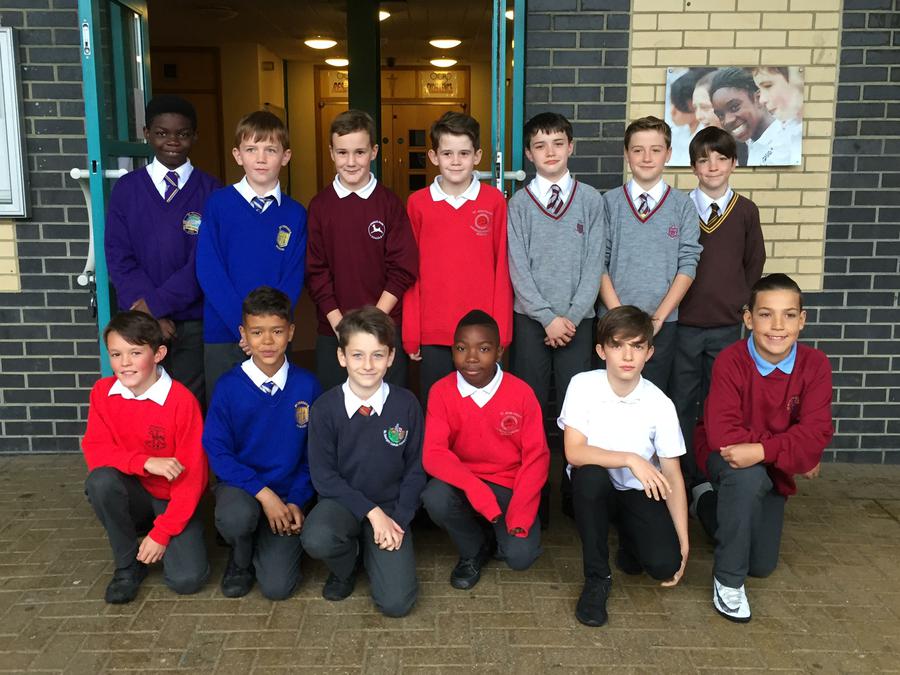 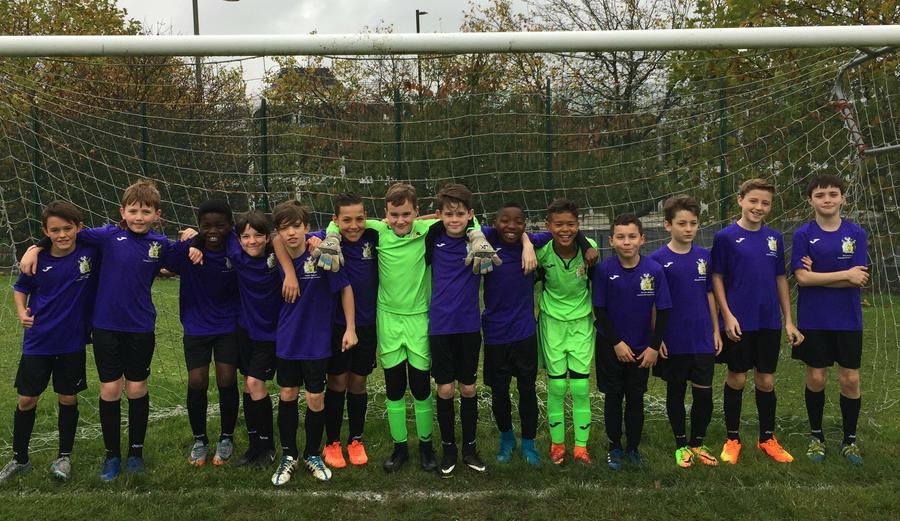 On Thursday 19th October two teams represented the school in a Gaelic Football tournament at Greenford. Their first match was up against Annunciation winning 8-6, making a great start to the tournament. Their second match was against St. Bernadette’s with a 3-3 score. The last qualifying match was against St. Dominic Savio of Reading, St. Teresa’s won the game 10-4 which lead them to the knock out stages.

The Knock Out Stages

After a good start to the tournament St. Teresa’s were in the quarter finals against St. Joseph’s. Three quarters of the match was finished, it was 10-10 and suddenly Niall Murphy scored the winning goal for St. Teresa’s to put them through to the semi-final. They faced St. Dominic Savio with Joshua scoring a goal for St. Teresa’s for 1 point but it wasn’t enough to keep them in the game that gave a score of 10-9. We would like to congratulate everyone who took part from both teams. 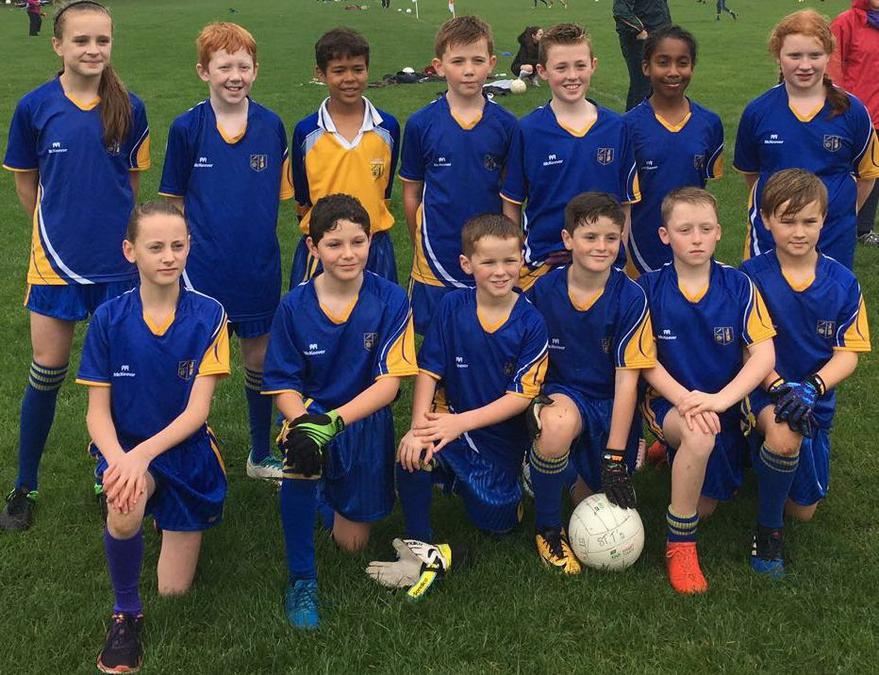 The tournament started with 3 groups of 3 teams, St. Teresa's were grouped with West Lodge and Grimsdyke.  We won the first match against Grimsdyke 1-0 but lost the second game 3-0 against West Lodge.  The defeat placed us into second position.   After the first round of games were completed, all teams that finished second in their groups were placed together as were the teams who finished first and third respectively.  In the second group of games we were paired against Longfield and Marlborough.  We won both of these matches 2-0 to finish fourth overall.  All the boys who played represented the school very well and were a credit to St. Teresa's. 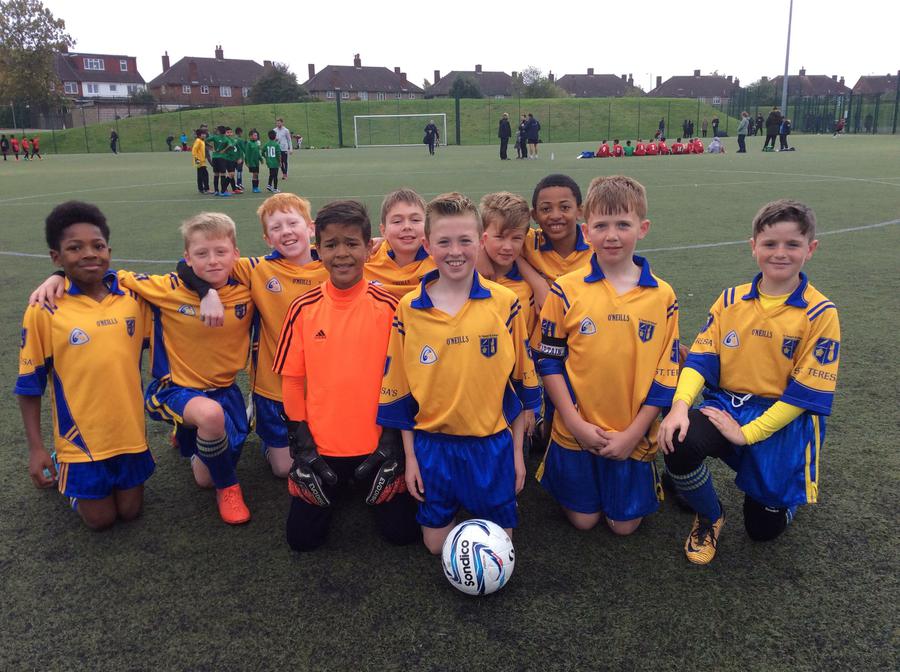 Thank you to Louis and Keelan (6Y) for representing St Teresa’s in the Harrow District Team.

Harrow started off the season with a great victory over Brent by winning 5-1. The team gelled together very well for the first game. Our goals were scored by Thomas (Pen) followed by Verrell to make it two nil. Brent scored a penalty to bring it back to 2-1. In the second half we dominated play with Pierce and Michael scoring to make it 4-1, the scoring was rounded off with Thomas scoring his second of the day to cap off the 5-1 scoreline. At the end of the game our players voted for their man of the match, they found it very difficult to choose as all the players played very well, it was close with Michael just pipping Thomas. Well done to all the players as they represented your school and Harrow very well. 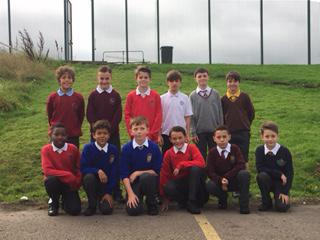 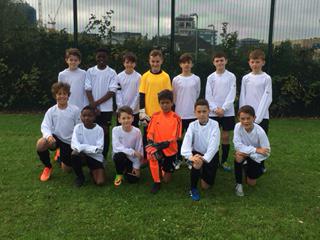 On Thursday 28th of September 2017 Year 6 from St Teresa’s went to the Harrow rugby field to take part in a tag rugby match. Before arriving the children were split into blue and yellow teams. As soon as the children got there Arron led warm-ups to get the teams ready for their matches. The teams had a quick talk and started their first match.

Both teams were against West Lodge and yellows and blues started very well. In the first 5 minutes Jogaile had scored a try. As soon as Jogaile had finished scoring West Lodge had a quick come back and scored. For the blue team Ryan had scored. At the end of both matches it was 5-3 to St Teresa’s!

When the break was over, both teams were against St Joseph's who were difficult teams for them to play. For the blues, Elizabeth was great and scored 2 tries and for the yellows, Rohan was incredible by also scoring 2 tries. Louis Stent was also fantastic, scoring 2 tries. The result was yellows 5-3 and blues 5-5.

When all the matches had finished the teams assembled but there was no winner because Harrow Ruby had arranged a friendly rugby match. The children had left with their heads held high. 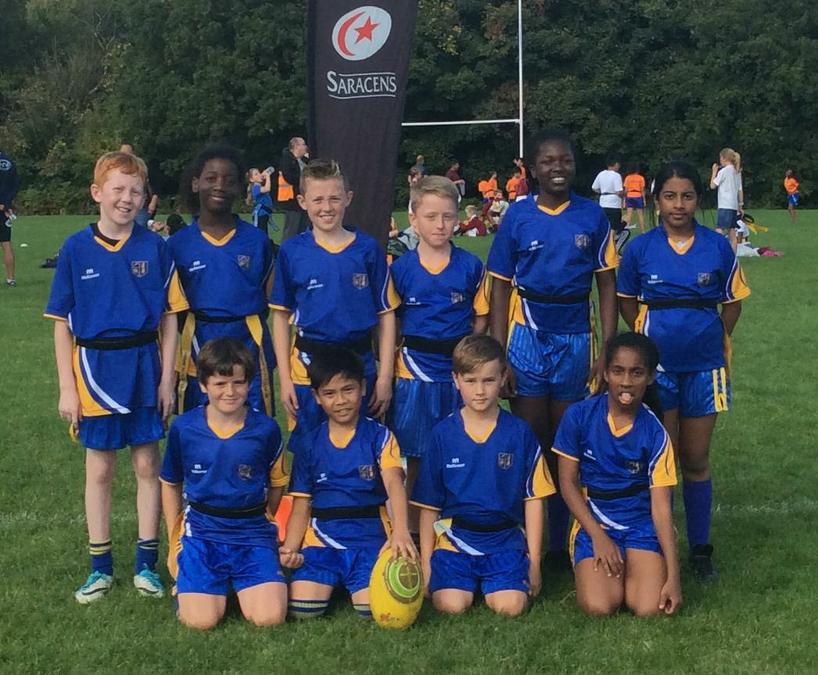 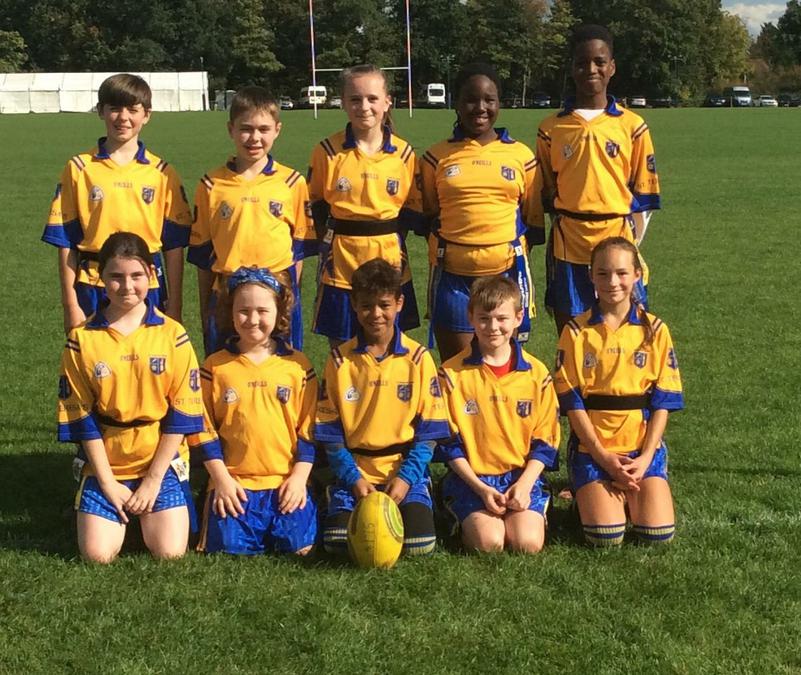 The first activity for the nursery sports day was the jumping over ropes activity.  The three teams were surprisingly good but there were no winners for the first three activities.  The second activity was a musical instrument race which was excellent and the nursery students actually did even better than the first activity.  The third activity was the egg and spoon race which Ava did fantastically well at and she was almost the only nursery student who got to the finish without fail.  The final and the most anticipated event was the welly-boot throw, which was all of the kids and adults favourite event.  All the children did very well and there were a lot of WINNERS! 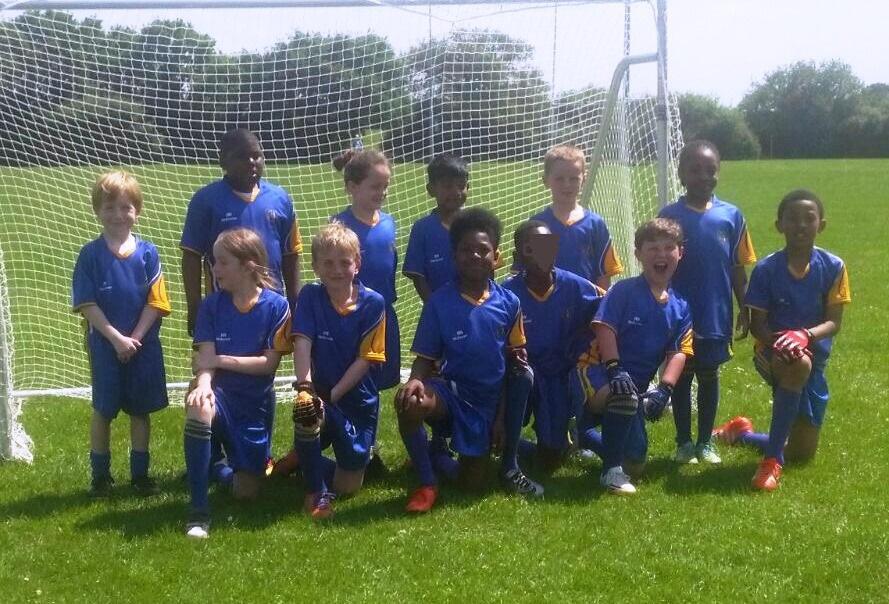 On Thursday 25th May 12 pupils from Years 3 and 4 went to Tir Chonaill Gaels to compete in the Year 3-4 London Gaelic Football Blitz. The team were very strong winning every game in the group stages, qualifying top of the group. In the semi-final they met local rivals St. Joseph’s and beat them to play Aldersbrook in the final. The team saved their best performance of the day for the final, winning a very tough game by 7 points to 4.  A special mention goes to CJ and Lilly who were recognised by the referees as standout players on the day. The School are extremely proud of all the children who attended the competition. 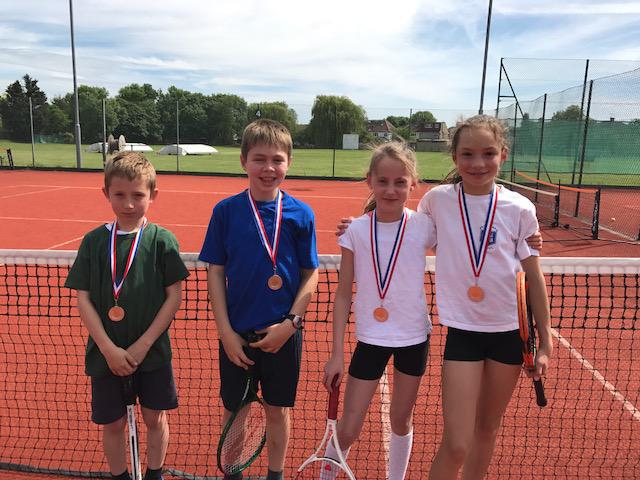 On Monday 22nd May four children from year 5 participated in the year 5-6 London Youth Games Tennis Qualifier at Kenton Tennis Club. The children did extremely well, qualifying from the group stages to proceed to the final where they came up against a strong side from St. Joseph’s who beat them by a single point. The children should be extremely proud of themselves! Hopefully next year they will win the competition. The School are extremely proud of the children. 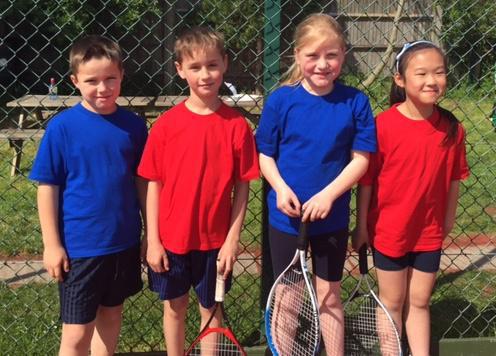 On Thursday 18th May, four children from year 3 took part in the Year 3-4 London Youth Games Tennis Qualifier at Kenton Tennis Club. The children qualified from the group stages to proceed to the semi-finals where they were up against a strong side form West Lodge.   They were unfortunately beaten by a single point.  We are very proud of the team! 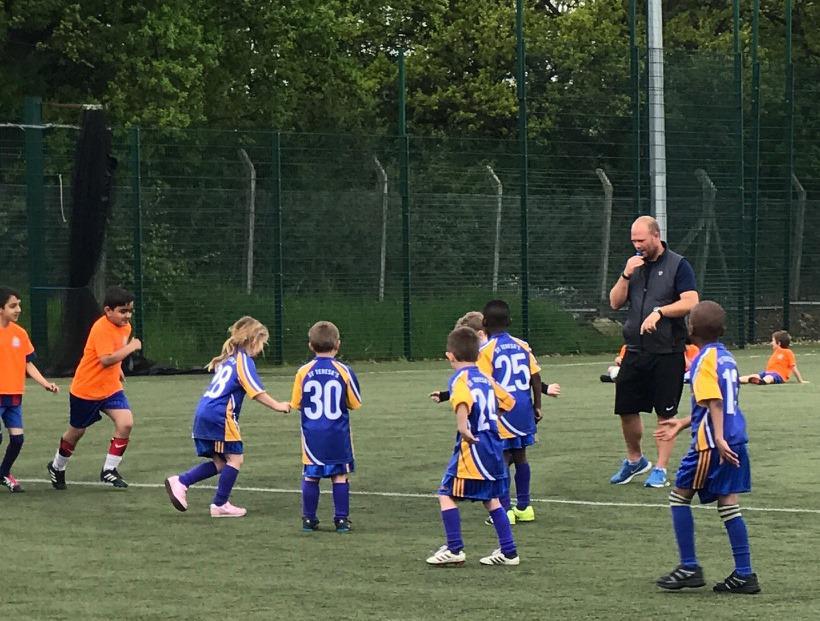 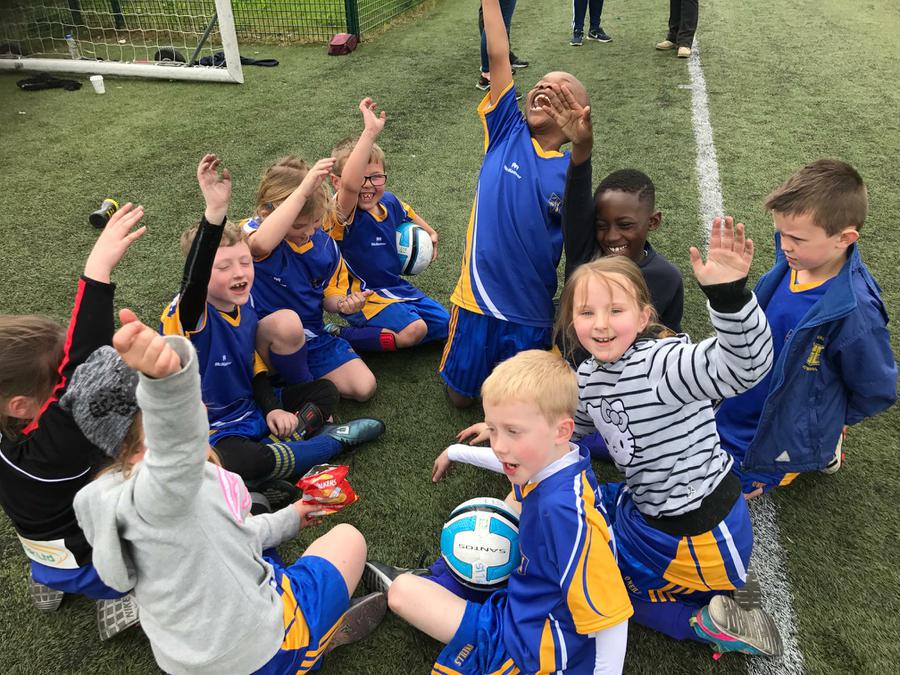 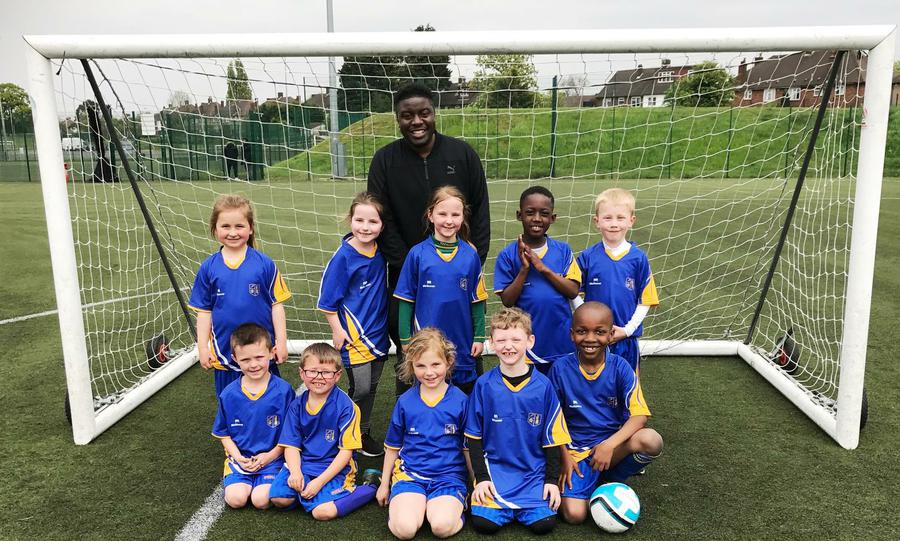 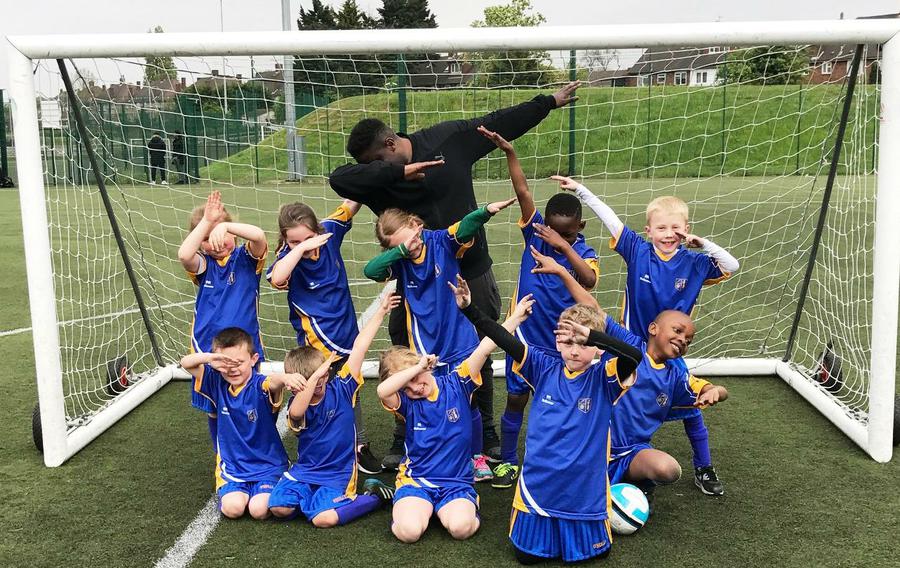 On Thursday 20th April ten children went to compete in the mini football tournament at The Hive Football Ground. The children competed very well and enjoyed themselves throughout the day. Although they didn’t win any games you can see there is a lot of talent coming up through the school so watch this space! 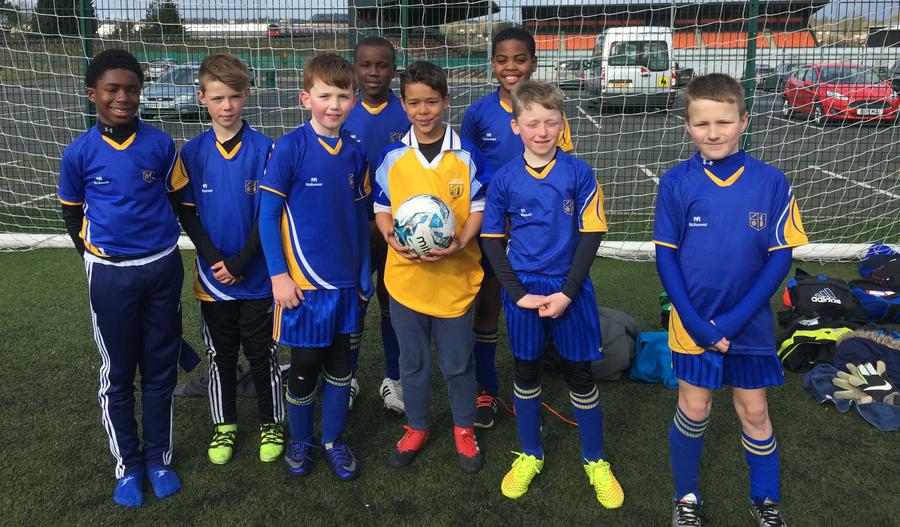 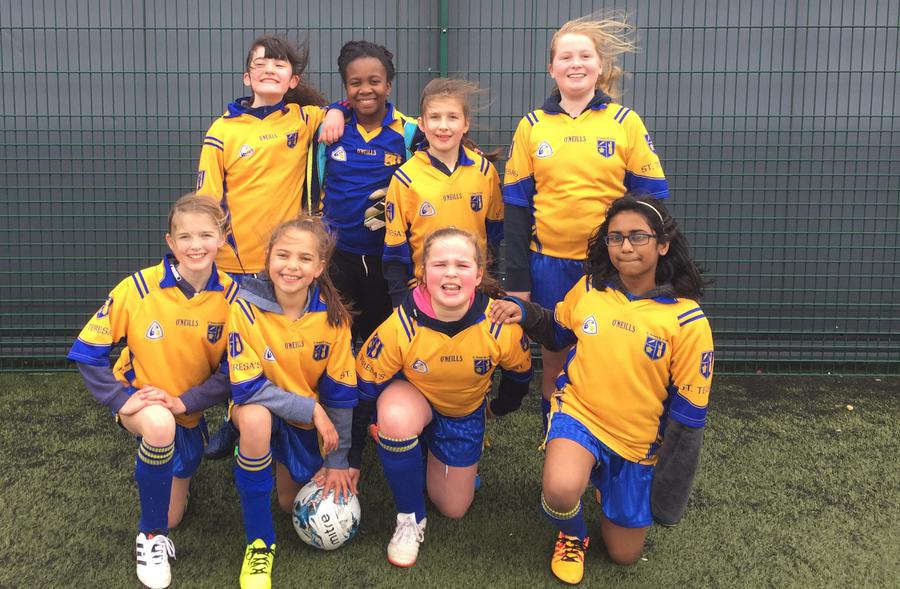 Eight boys and girls from Year 5 and 6 both took part in two separate tournaments, with the boys playing in the morning and girls in the afternoon. Both teams played really well and represented St. Teresa's exceptionally. The two teams got through their group stages undefeated and both finished second. Unfortunately, the girls didn't make it into the semi-finals. The boys team made it through to the quarter final and beat Marlborough in a tense penalty shootout. Next they played St. Joseph's and were unfortunate not to score, St. Joseph's sneaked a goal in the final minute to win one nil. Overall, both teams played very well and should be proud of their accomplishments.